Teaching Palestine: Pedagogical Praxis and the Indivisibility of Justice

An International Symposium Call for Proposals

Initiated by the Arab and Muslim Ethnicities and Diasporas Studies at San Francisco State University and co-sponsored by several Palestinian and international academic and intellectual institutions, the international symposium on Teaching Palestine: Pedagogical Praxis and the Indivisibility of Justice will be convened during the World Congress of Middle East Studies (WOCMES), in Seville, Spain, July 16-20, 2018.

The symposium is part of AMED Studies’ multi-site and multi-year project on Teaching Palestine: Pedagogical Praxis and the Indivisibility of Justice. It builds on fall 2016-spring 2017 Conversations on Palestine: Colonialism, Racism and Justice, held at and in collaboration with the Center for Place, Culture and Politics at CUNY Graduate Center; spring 2017 Teach-in on Palestine at the Left Forum in New York City on June 3, 2027; the Thematic Conversation at the Middle East Studies Association (MESA) on November 19, 2017; the international conferences at Birzeit, An-Najah National and other Palestinian universities and (research centers in Palestine in March 2018); as well as several other symposia, conferences, and seminars at other international locations.

View the Call for these Proposals

Teaching Palestine: Pedagogical Praxis and the Indivisibility of Justice

An International Conference Call for Proposals

View the Call for the Proposals

Issa Amro will be joined by Mustafa Sheta of the Freedom Theatre in Jenin. The Theatre's mission is to foster creativity and independent thinking in the youth of the Jenin refugee camp, who must confront both military occupation and a traditional society; its cultural work is also a form of resilience and resistance.

Report Back from Palestine Prisoner and Labor Solidarity Delegation

May Day 2016: Work Under Colonialism and the Politics of Solidarity in Palestine and USA

From Oakland to Palestine: Prisons, Repression and Resistance 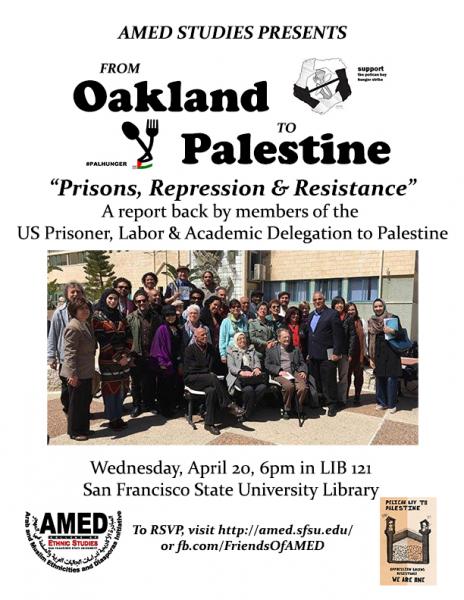 (PLEASE NOTE: Affiliations are for identification purposes only)

Manuel La Fontaine, All of Us or None

This public educational event will begin with excerpts from films on Puerto Rico and include presentations by two members of the U.S. Prison, Labor and Academic Delegation to Palestine that just returned to the U.S., Former Young Lords Party Member Jaime Veve and SF State Alumnus Manuel La Fontaine. 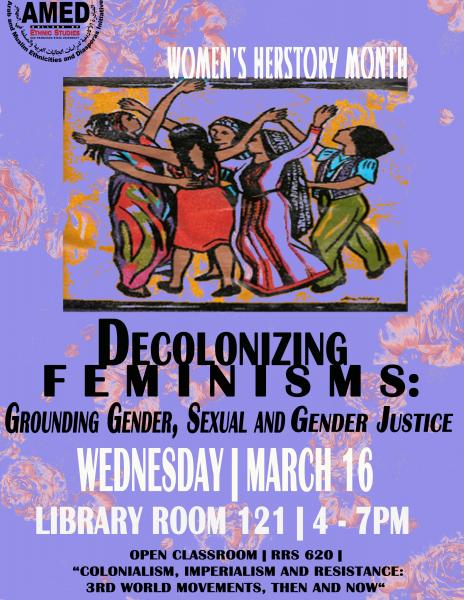 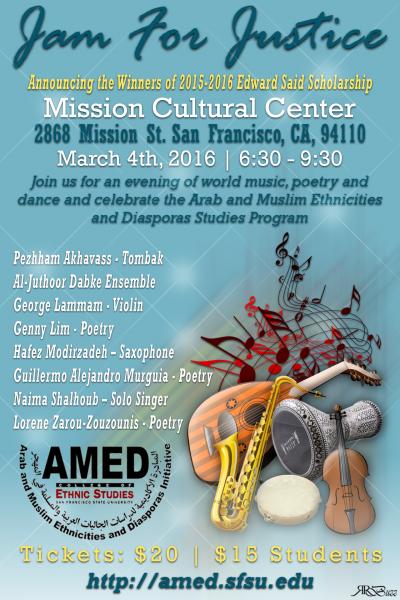 Phil Hutchings, Past President of SNCC

Oceanhille-Brownsville, the Bronx, and the 1960s Black & Puerto Rican Struggles for self-Determination

From Ferguson to Palestine: Historicizing Black Solidarity with Palestine

Loss of Land and Life

AMED Studies, along with GUPS and ASI, invites you to the 8th anniversary of the Palestinian Cultural Mural honoring the late Professor Edward Said on Thursday, November 5, 5:30 p.m., at Jack Adams Hall in the Cesar Chavez Student Center. The event will feature the one-woman-play, Palestine, by Najla Said, Edward Said’s daughter. RSVP Online.

The event will include screenings of Visions and The Wanted 18 film followed by a Q&A with the Director Amer Shomali. The visions program is a collection of AFF short films that re-imagine the narrative form in exciting and innovative ways. “The Wanted 18” is Palestine’s nomination to the 2016 Academy Awards. The Wanted 18 recreates an astonishing true story: the Israeli army’s pursuit of 18 cows, whose independent milk production on a Palestinian collective farm was declared “a threat to the national security of the state of Israel.” More info about AFF at SFSU event.

1492: Colonialism, Racism and Islamophobia from Andalusia to War on “Terror

Open Classroom: The Global COINTELPRO and the War on Terror

This fund is named in honor of Edward Said, a Palestinian American literary theorist and public intellectual who helped found the critical-theory field of Post-colonialism and was a champion of justice for and in Palestine. Read more about Edward Said Scholarship at SFSU

Global COINTELPRO and War on Terror: 9/11/2001, McCarthyism, and Disciplinary Mechanisms

Join AMED for an open classroom with film screening of "COINTELPRO 101" and "Voices in Exile: Immigrants and 1st Amendment Right" followed by panel discussion with scholars, community activists and moderated by Dr. Rabab Abdulhadi, AMED, SFSU. Read more about the Global COINTELPRO event.

Dr. Rabab Abdulhadi and Dr. Simona Sharoni met over twenty five years ago and have collaborated over the years on multiple scholarly and activist projects. Aside from sharing a life commitment to the struggle of peace and justice in Palestine, these two prominent feminist scholars have made contributions to other struggles for social, gender and sexual justice in the academy as well as at other international and North American sites. Read more about resistance and solidarity event.

AMED and the Center for Political Education in San Francisco Present “Colonialism, Imperialism and Resistance"

The Center for Political Education and the Arab and Muslim Ethnicities and Diasporas Initiative (AMED) will hold a five week class comparatively examining Third World liberation movements in Africa, Latin America, and the Arab World and reviewing debates about postcolonial studies and the relevance of such intellectual projects to the postcolonial world. Read more about AMED and CPE course.