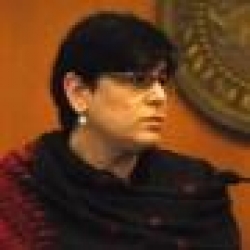 Dr. Rabab Abdulhadi is Associate Professor of Ethnic Studies/Race and Resistance Studies and the Senior Scholar of the Arab and Muslim Ethnicities and Diasporas Initiative, at the College of Ethnic Studies, San Francisco State University. Before joining SF STATE, she served as the first director of the Center for Arab American Studies at the University of Michigan, Dearborn. She received her BA (Summa Cum Laude) in Special Honors Curriculum, Sociology and Women’s Studies from Hunter College in New York and her MA, MPhil and PhD from Yale University. A co-founder and Editorial Board member of the Islamophobia Studies Journal, she co-authored Mobilizing Democracy: Changing US Policy in the Middle East, and co-editor Arab and Arab American Feminisms: Gender, Violence and Belonging, winner of the 2012 Evelyn Shakir National Arab American non-fiction Book Award, and a special issue of MIT Electronic Journal of Middle East Studies special issue on gender, nation and belonging (2005).Her work has appeared in Al-Shabaka; Gender and Society; Radical History Review; Peace Review; Journal of Women's History; Taiba: Women and Cultural Discourses; Cuadernos Metodologicos: Estudio de Casos; This Bridge We Call Home; New World Coming: The 1960s and the Shaping of Global Consciousness; Local Actions: Cultural Activism, Power and Public Life in America; The Guardian, Al-Fajr; Womanews; Palestine Focus; Voice of Palestinian Women; and several Arabic language publications, such as Falasteen Al-Thahwra; Al-Hadaf; and Al-Hurriyah. Dr. Abdulhadi profile.

Graduate Assistant at AMED and Graduate student of Ethnic Studies.

Heather Abu Deiab works at the Arab and Muslim Ethnicities and Diasporas Initiative (AMED) and is a master's student in the Ethnic Studies Graduate program at San Francisco State University. Her thesis traces current U.S. manifestations of Islamophobia from 1492 and analyzes how colonial and racial projects have created and informed Islamophobic policies and ideologies. This work explores the presence of Islamophobia throughout the history of U.S. settler colonialism and showcases how a history of enslavement, genocide, exclusion, internment and indentured servitude against indigenous communities and people of color has continued to shape Islamophobia's evolution into what we see today. Heather was also the first student to receive a bachelor's degree in Arab and Muslim Ethnicities and Diasporas study at SF STATE, which she designed herself through the special major program. 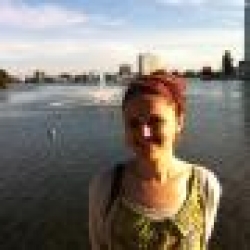 Mira Nabulsi is a Palestinian graduate student in Communication Studies at San Francisco State University (SF STATE). She works at the Arab and Muslim Ethnicities and Diasporas Initiative (AMED) of the College of Ethnic at SF STATE. In 2008 Mira received a Master’s Degree from Jaime I University in Castellon, Spain, in Peace, Conflict and Development Studies, focusing on Media and Intercultural Communication. Before joining AMED she worked as a Research Assistant at the Center for Development Studies at Birzeit University in Ramallah- Palestine; her work mainly focused on Conflict-Related Development Analysis. At SF STATE she co-taught a class titled: “Comparative Border Studies Palestine to Mexico”, and is a member of the International Executive Board of the Palestinian Youth Movement (PYM) a transnational, independent, grassroots movement of young Palestinians in Palestine and exile. Mira’s main research interest is related to the rhetoric of social movements and the role of communication and technology in processes of social change.