Rabab Ibrahim Abdulhadi of San Francisco State University, Catherine Moran of the University of New Hampshire, and Anne Sisson Runyan of the University of Cincinnati are this year’s recipients of the AAUP’s Georgina M. Smith Award, which is given to a person or persons who provided exceptional leadership in a given year in improving the status of academic women or in academic collective bargaining and through that work improved the profession in general. The academic and community work of these three women encompasses important aspects of academic labor struggles--the struggle for fair treatment, the struggle to be recognized, and the struggle to be included in institutional visions of progress.

Rabab Ibrahim Abdulhadi exemplifies courage, persistence, political foresight, and concern for human rights, including union organizing, gender and sexual justice, in her scholarship, teaching, public advocacy, and collaboration with a diverse group of academic, labor, and community organizations. Her commitment to global scholarship that builds mutual understanding is evident in the collaborations she has initiated. As a director of the Arab and Muslim Ethnicities and Diasporas Studies Program she brings together scholars, activists, academics, and organizers to create justice-centered knowledge, build broad-based coalitions, and advance the agenda for social change in Palestine, the United States, and internationally. Her leadership transcends the division between scholarship and activism that encumbers traditional university life. 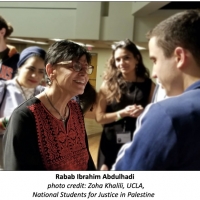